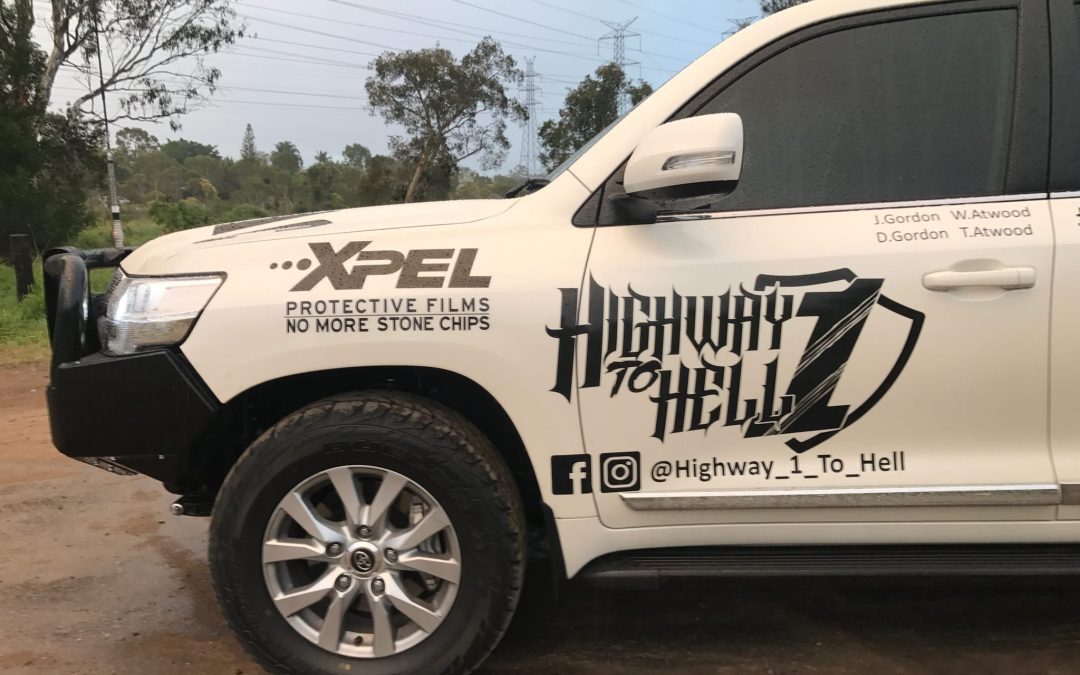 This story is one that starts back in 2017… and you might be thinking why only blog about it now? Well put simply, the story we’re about to tell you remains unbeaten, as well as remaining a seriously impressive feat not only for the guys in the story, but for XPEL Ultimate protection.

Rob from Auto Protective stumbled across some information back in 2017 that a group of guys were planning a lap of the country in the shortest time possible, and would be raising some money in the process. We simply had to be onboard.

We approached the guys to get some more information, and the story was that they’d purchased a brand new Toyota Landcruiser Sahara with the intention of doing a lap around the M1 highway in the shortest time possible. A record previously set at 6 days, 8 hours and 52 minutes, however was ONLY done on the bitumen section of the route.

With these guys in one of the most capable 4WD’s on the market at the time, they were going to do it the hard way. Including a 700+km stretch of rough corrugated road in North Queensland… at night.

The trip was to go on and be named – Highway 1 To Hell.

The journey included a team of 4 mates, in a lightly modified Landcruiser Sahara. Modifcations included a steel bull bar from TJM, a Kaymar rear wheel carrier bar for the extra spare, a long ranger fuel tank, some high intensity spot lights, and plenty of GPS tracking and other electronic goodies.

The journey would happen in shifts to essentially allow for no stops other than refuelling when required.

Our involvement was to be bought in to protect the vehicle from stone chips. 14,000km or more of highway is tough on any vehicle, but when you’re on a tight timeline to do the lap, there’s going to be an element of carnage. We also (somewhat foolishly) agreed to clean it for them at the end of the journey.

The vehicle was fully wrapped in XPEL Ultimate film (ppf). The idea was to put this film to the ultimate torture test of a gruelling 14,000km trip. Bugs, rocks, birds, kangaroos, all came into contact with the vehicle, in fact there was very nearly a large black bull as well. We also used Gyeon Quartz MOHs+ ceramic protection on the vehicle, and Gyeon Quartz View on the windscreen with the goal of being able to keep the vehicle as clean as possible, and the windscreen as bug splatter free as possible.

We can report that the journey was completed by the guys, with a total of 14,280km being completed in 5 days, 14 hours, and a few minutes. A new record. We were in convoys with the guys as their vehicle crossed the Gateway Bridge, with horns blasting and cheers on the live stream as they crossed.

After the dust settled (pardon the pun), we got our hands on the vehicle to do a post trip inspection. Overall the vehicle was in a reasonably clean state (outside). The XPEL Ultimate protection absolutely did its job. Only 1 rock impact had made it through the film, with enough impact to only lightly chip the paint. Being on a mirror cap, the impact to the finish was a few dollars for some paint on the mirror and the vehicle presented as brand new.

If you’re planning a lap, albeit a little slower than these guys, trust in the proven protection of XPEL Ultimate.